A backwater trip on a houseboat is an almost obligatory Kerala travel itinerary, and the beauty of the landscape well worth to explore. However, as a matter of fact the waterways in and around Lake Vembanad are quite crowded even off-season (I do not really want to know how jammed it must be during the main season). With nearly a 100 procent diesel-fuelled boats (Most locals react with a disbelieving "What else?" when questioned upon this topic), most of them poorly mocking the look of traditional kettuwallams, and many of them disposing their waste into the water, this grand experience of an eco-system almost seems a no-go for the eco-conscious traveller today.

There is however a niche market for backwater trips on traditionally built houseboats. It requires some effort to find these tour operators, and they play in the upmarket price category.

A pioneer in sustainable tourism in South India the luxury class hotel and resort chain CGH operates Spice Coast Cruises, offering backwater tours on diesel-fuelled one or two-bedroom boats. Electricity comes from solar panels, and the crew is carefully trained to not at any costs throw waste into the water. (Their relieved looks when it turned out that all we were throwing over board was water -- emptying a glass of drinking water where some insects had been caught -- were speaking for themselves.) There's of course room for improvement: Unlike in the Brunton Boatyard hotel in Kochi where the chain is serving drinking water from a hotel-owned drinking water plant in reused glass bottles, the drinking water on the boat came from plastic bottles, and after the crew had prepared the rooms for the night the AC was running on full power. (Since both, the power switch and the AC control were working we were able to adjust temperature and fan ourselves.)

When I enquired in advance on whether the boats were punted or diesel driven the sales person's argument for the diesel was that this way the crew would be able to sleep during the night. Since the boat was anchoring at the entrance to Lake Vembanad during the night you may question this argument, but in general we got the impression that CGH treats their staff well.

As the Spice Coast Cruises vessels are comparatively small the boats are also cruising some smaller waterways. Compared to all the other vessels on the lake, most of them poorly disguised tourist ferries, our boats were the most elegant ones, displaying mastership in the craft of traditional kettuwallam building.

The tour is easy to book from abroad, but don't be mislead by the information of the starting point -- it is not starting in the town of Alleppey as you may read the announcement. Instead plan for an about 25 km long car or rikshaw drive up north to get to the jetty in Puthanangadi.

Punted houseboats are hard to find, and I have neither seen nor taken one. Here is what I found out -- I'd be happy if you'd give me an account on your experience with the following operators in case you make use of them: Houseboat tour operator Coco Houseboats in Alleppey operates manually driven house boats (among other vessels) which can be easily booked from abroad. I got a quote for "a Deluxe 2 bedroom houseboat Alleppey to Alleppey round for 2+2 persons with tax and food Rs.15,000/- after discount" off season.

Fort Cochin based tour operator Wilson Tours seems to specialize in eco-friendly tours and offers houseboat trips on punted kettuwallams equipped with bio-tank toilets and solar powered light and fan. If you do not order in advance you can step by their office in Princess Street.

Just opposite the street Elite Hotel also advertises "eco-friendly houseboat near Alleppey". Whether they co-operate with Stanley Wilson or someone else I do not know.

Once an important port, now an ordinary Indian smalltown berieved of most of its historical buildings, with its formerly famous waterways overgrown by pernicious water hyacinth Alleppey most certainly is no longer worth the title "Venice of the East". If you come to stay over a 15 minutes auto-rikshaw ride outside town will however bring you to Sylviander House, a pleasant eco-consciously built homestay cum art gallery run by a German-Indian couple, writer designer Sylvie Bantle and painter Alexander Devasia. Airy and spacious double rooms with traditional beds equipped with mossie nets and a fan, and curcuma-washed walls expect the guest. All doors and furniture were recycled from traditional torn-down houses. Adjacent to each room you will find a roofed outdoor space with a handwash, and next to it a bathroom equipped with a traditional bucket bath (fill the bucket sink with water and use the stainless steel mug to shower yourself), and a (Western) toilet with a shower for your bottom. Toilet paper is provided but must not be thrown into the toilet to spare the house's eco-friendly bio-filtering system (there's no communal sewage). 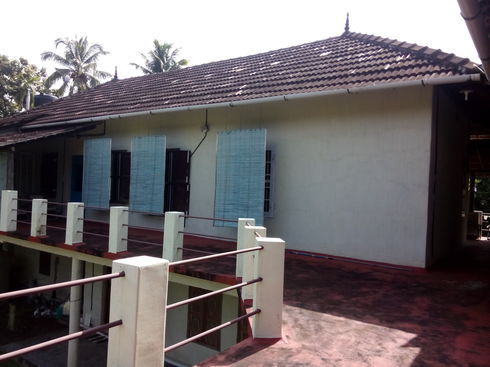 For breakfast and dinner you will be served home-cooked South-Indian food, vegetarian and -- if you want to please Alexander -- fish, freshly catched by local fishermen which he shops from the market and fries deliciously. The hosts put a lot of effort in sourcing ingredients grown according to organic principles, be it certified or from home gardens ('nadan') kept the traditional way without use of industrial chemicals. Some veges will also come from the Sylviander eco-garden, coffee, cocoa and pepper from their own organic farm in Kumaly, yoghurt from the neighbour's cow fed on Sylviander house grass. The water used in the house is collected rain water, filtered for drinking. A night in a double room including breakfast and dinner is Rs. 2000 off season. This is the only place listed in this post not offering a discount for children.

South of Kochi, directly situated at the backwaters in the village of Kumbalangi you'll find Gramam Homestay, a quiet, eco-friendly homestay which allows you to escape busy Indian city life. Its sustainably kept coconut garden by the water makes the surroundings for an old, nicely restored spacious farmhouse equipped with two twin beds and fans. The openness of the house allows you to experience all the noises of a tropical night. An outdoor bathroom attached to the cottage provides you with a roofed Western toilet and handwash as well as two showers under open sky. You'll stand on natural stones within some small bushes, and the used water from the shower percolates through the sand beneath the stones. Warm water is heated by the sun on the rooftop.

Breakfast (homemade Kerala food and/or prefab toast/"cereals") is complimentary, and lunch or dinner in the eating room next to the kitchen of the main house where your hosts, Jos and Lyma, live can be arranged on request. Some of the veges used in cooking may be nadan, but there is no emphasis on organic food or drinks. Staying in the cottage you however have a kitchen at your disposal. An off season cottage night for two is Rs. 4000 (the two extra beds Rs. 800 each), but if you are on budget there are also two cheaper rooms in the main house.

Jos will happily arrange a tour on a punted boat, a visit to a shrimps farm, or a car with driver for you. For our trip to Abhayaranyam wildlife shelter with its elephant camp and well-kept botanical gardens he arranged an organic breakfast (Rs. 600) at a friendly brahmin family's of teachers who showed us around their traditional house, well and organic garden where we learnt about nutmeg, macis, Indian basil, curry leaves and other spices (as well as some useful Malayalam phrases). 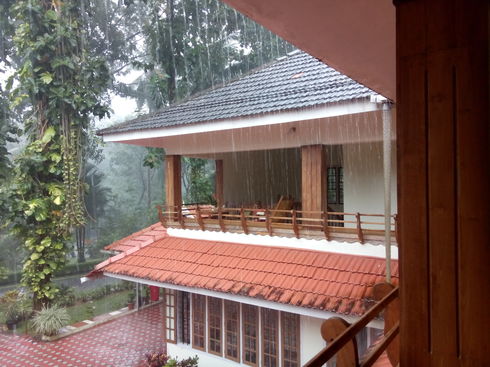 Far bigger than the aforementioned ones -- almost a simple hotel with 11 single and double rooms -- is the farmstay of Dewalokam Organic Farm, run by a friendly family of teachers and their staff from neighbouring villages. The farm has been a family estate for about hunded years, and after serving as a rubber plantation for the last generation, todays owners Jose and Sinta have been reconverting it into an almost self-sustaining organic farm following circular principles. While the entrance to the modern, though traditionally built main house is opposed by a spacious park, the land around the houses are now being used as spice, coffee, cocoa, vegetable and fruit gardens interspaced by some fish ponds. Chickens, ducks and turkeys range freely in the Souther-Eastern part of the gardens next to the cow, buffalo and sheep sheds. The cows' mock is collected and fermented in an underground tank producing fertilizer and the gas burnt in the kitchen stoves.

As we were lucky to observe during our stay newborn lambs are kept together with and fed by their mothers. All the cows were born on the farm itself, and none of the animals was deprived of their horns.

The double rooms in the first floor of the main house are simple, but spacious, clean and light, with an adjacent dressing room next to (Western) toilet and shower. There are more rooms in the adjacent older house. A night for two comes at Rs. 10,000 (8,000 off season) including four meals a day and activities like yoga in the morning, walks in the garden and in the vicinity, or cooking demonstrations. The house and the rooms are always adorned with fresh flowers.

The swimming pool is filled by fresh (rain) water, and you can also have a swim in the river. Jose and Sinta will also provide you with well-maintained bicycles for a village tour.

Most ingredients in the home-cooked meals (North and South Indian, with a continental style soup without spices to start lunch and dinner with) come from the farm itself (if you travel with children: The french fries are prefab and not organic). Guests usually are served seafish instead of fish from the ponds as the bones of the latter may be an obstacle, but if you insist you will be served a truly locally sourced fish curry. You may also purchase spices grown on the farm.

A side note: Before you start criticising any of the aforementioned places for burning paper and plastic waste on their land hesitate a minute and think about what you were going to do without communal waste collecting and separating facilities which generally are not available in rural areas.

Their website was gone, their phone number no longer operating, and they did neither answer e-mails nor Skype messages. Finally I got an automated answer that they were closed due to monsoon repair and would reopen in August. We tried to call again from India mid of August 2016, and still the phone was gone. So some doubts may be raised whether the following eco retreat in Varkala is still operating:

Mind you, there's a place with a similar name, the "Eco Bohemian Masala" which tries to fool tourists into believing it was the aforementioned eco stay. Don't fall for it -- according to Tripadvisor posts it seems to be a place to be avoided. If you happen to actually stay at the real Bohemian Masala, let me know.