Travelling Europe by Bike (and Train): Munich to Venice

Many years ago I noticed a sign post in Munich: This way to Venice on bike. Since then the idea has been developing, and this year I had almost sufficient time off to get on the road from Munich to Venice. Almost: To cross the alpes and the dolomites comfortably, in style and on the same motorless bike used in daily city traffic five days are not enough.

Accommodation on the route

The route's official webpage has a directory of bicycle-friendly accommodations, but since you cannot simply search for a place its use is limited. More, (sometime the same) places can be found on the reliable Bett&Bike site run by Germany's bicycle association, the ADFC. Unfortunately none of these directories allows to filter for environment- and climate-relevant measures like organic breakfast, use of renewable energies or environment-friendly cleaning agents. These efforts towards sustainable tourism are taken into account by the EcoBNB platform.

Most other cyclists we met on the route had a tent with them, certainly the cheapest, but also the most uncomfortable way to spend the nights. We preferred to carry a minimum of luggage, and decided on a budget between 100 and 200 EUR for the night. Unfortunately this budget was too tight for the places I found where you probably could have a fully organic breakfast.

For the first and last stop, Innsbruck and Venice we booked accommodation upfront, but being unfamiliar with the route we decided on last-minute booking directly from the hotels.

The first night we spent at Hostel Marmota in Innsbruck. It has a spacious bicycle storage room in the basement which is locked during the night. Arriving late was no issue; even though the reception did not answer the phone. The bar did not offer any organic refreshments, but there was one type of organic tea and organic oat drink at the breakfast buffet. Clean, basic, no-frills room.

For the second night in the Puster valley my partner learned a lesson: Do not rely on Google Maps (personally I don't use Google services unless forced to): Even a few kilometers can be very long when they turn out to be uphill after a day on the bike. Our last minute booking call to Naturhotel Edelweiß in Terenten/Terento resulted in a very friendly price for a spacious, very nice, wood-furnished room including four-course dinner (for guests only).

The kitchen at this family-run hotel uses local ingredients, but isn't suitable for vegetarians. Also here the only organic items on the breakfast buffet were one type of tea and a plant-based drink (soy in this case). There's no storage room for bikes, but we were allowed to park directly in front of the hotel and turned out to be an attraction for car-dependent hotel guests. 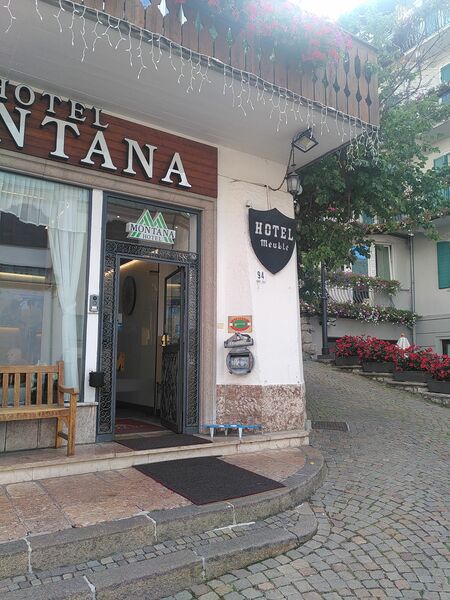 Famous for hosting the winter olympics of 1956 the 2022 version of Cortina d'Ampezzo in the Dolomites turned out to be a single expensive (though still quite elegant) pedestrian street in the middle of a car jam which even us on our bikes forced into a stop-and-go. The most expensive night of our tour we spent in a basic room with plush furniture at Hotel Montana with a very nice view from the balcony and the air of past grandezza. In addition to the one variety of organic tea and organic soy drink (by now experienced as a sort of minimal standard) the breakfast buffet offered one variety of organic blueberry jam! The hotel was listed as bike-friendly, and indeed, we could store the bikes in a crammed storage room dedicated to the purpose. 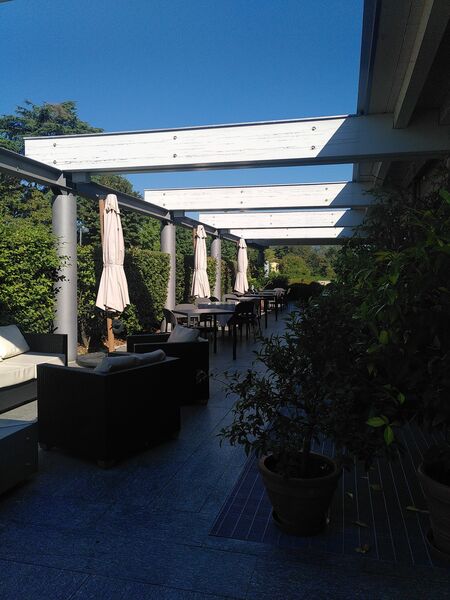 The last night on the way to Venice we spent in Conegliano, at Relais Le Betulle which we found at at EcoBNB. Their hotel restaurant, Enrica Miron, serves organic meat and eggs, and we were very satisfied with our carte blanche menu of the day. The breakfast buffet however did not offer more organic items than we by now found usual. There's no dedicated parking space for bikes; we were allowed to take the bikes on the (spacious) room (which had sufficient space on the balcony), but decided to use a car parking lot.

To find a bicycle-friendly accommodation at the final destination, Venice, is not so easy given the aquatic nature of the city. Riding a bike is possible on the Lido, and from a previous bike tour through the Veneto (via Chioggia) we knew that the friendly, family-run Villa Casanova would allow us to park the bikes in its backyard. From that visit we also knew not to expect any organic items on the breakfast buffet (not even tea and milk), despite the fact that the hotel advertises partially organic breakfast. But the rooms are pleasant and the price is friendly compared with Venice standard.

For the following hotels I found sufficient evidence for use of organic produce in the kitchen and/or a significant part of organic food and drinks at the breakfast buffet, but I cannot give an eyewitness account.