The idea was simple: Instead of flying – why not travelling climate-friendly? Most certainly this would take some time, but travelling Oslo–Berlin–Paris took time for the famous painters, writers and artists more than a hundred years ago, too.

Upfront research showed that it would have been possible to reach Trondheim within a little more than two nights and a day during the summer 2021, but we were restricted to travel in the first half of September by the date of a family festivity, limited days off from work and the end of the Bavarian school holidays. With only 10 minutes connecting time in Hamburg and, in case of a miss, the next possible connection one week later due to change of timetables on the Swedish part, we gave up on the plan of the fastest possible route. Instead two additional nights, one in Hamburg, and one in Copenhagen, would not only give us a little leisure to re-visit these cities, it would also increase the amount of money to spend: If you decide to travel Europe by train and do not have all the time of a university break a reasonably priced Interrail ticket simply won't suffice.

Finally the travel itinerary came up to

Altogether four nights and about three and a half days involving six train companies – most of them not co-operating. Had we had the time and money for a return trip it would even have been possible to take bicycles on the tour (at least to the Norwegian border).

Amidst the covid-19 pandemic a new privately held German train company took the courage to re-establish over-night travel by train on the North-South line through Germany, one part of the train departing from Salzburg, another from Konstanz by the lake Bodensee to be united on their way to the island of Sylt via (among others) Munich and Hamburg. The train is operated two times per week and tickets can be booked online only. The company informed by e-mail that the departure of the train wouldn't be visibly announced at the train station, but sent time, platform and car location for all stations on the route.

With this information at hand I didn't get nervous when the display at platform 6 in Munich Ostbahnhof announced that all trains would depart from platform 11 or 12 (presumably due to the strike of the Deutsche Bahn train drivers in the summer of 2021). Some fellow passengers found out that this also applied to the Alpen-Sylt-Express, and the entire crowd moved over.

What didn't show up in time was the train by the time of arrival and not even by the time of departure, and as announced, there simply was no information. A helpful staff member of the Austrian train company ÖBB reassured us that the train would arrive here, and finally it appeared on the platform display and, by about half an hour delayed, arrived. 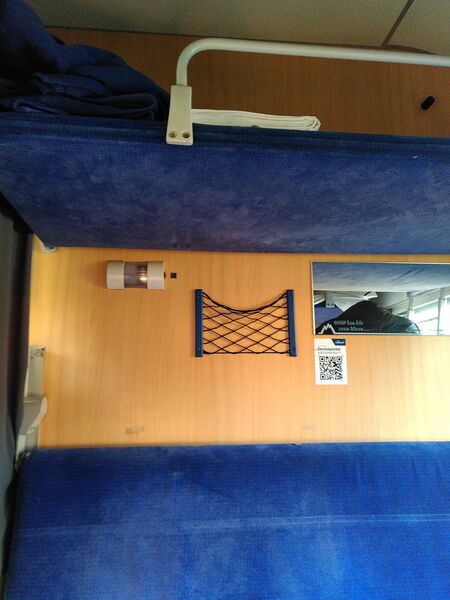 From now on everything went smooth (at least until we reached the Norwegian border). Due to the pandemic no strangers were booked into the former Deutsche Bahn couchette compartment which came at a price of 300 EUR for the two of us. The interior as well as the common wash and toilet facilities were clean, though a little worn. The almost doubly priced (or, in luxury class even more expensive) sleeper (with private room) is of French origin, and there's a very competitively priced seat car (starting at around 70 EUR).

On the train it would have been possible to order a pair of organic soft pretzls, organic tomato soup and organic porridge for dinner and breakfast, though no organic drinks.

Clean sheets were provided for all six sleeping places, and despite being a German train the proper way of sleeping was the Southern way wrapped into the sheet and covered with a blanket. Needless to add that in the couchette car you are expected to make your bed yourself. Complimentary drinking water to brush your teeth was not provided.

Danske Statsbanen (DSB) and Deutsche Bahn (DB) co-operatively run the city connection between Hamburg and Copenhagen via the Storebelt bridge, so buying tickets more or less spontaneously and without providing personal data, at a German or Danish train station usually shouldn't be an issue. The direct IC train runs four times a day to and fro and keeps waiting at the platform in Hamburg central station between arrival and departure. Unfortunately you aren't allowed on board more than fifteen minutes before departure – the train will be closed while the staff is having their break.

There are more connections where you have to change trains, but with almost all of them the journey takes around five hours.

The direct Intercity train is comfortable and – just as the night trains – has capacity for bicycles. Ticket prices vary, depending on whether you have a Bahncard discount card, as well as on how long in advance and where you buy it.

Effectively an urban train line over the Öresund bridge tickets for the Öresundtåg regional train can be bought from the ticket machines at København H – anonymously as long as you see away from the card payment which is the most comfortable payment method if your stay in Denmark isn't long enough to use Danish cash.

Since we travelled during the covid-19 pandemic passports had to be provided in the train which stopped but was closed during the border control. 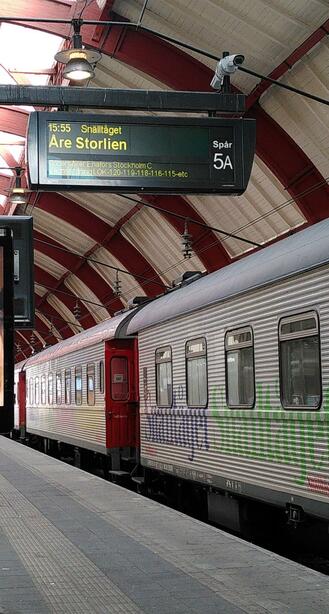 As far as I know night trains between Stockholm and the Swedish-Norwegian border at Storlien have been running for ages, and quite recently the privately held Snälltåget has extended its network to Berlin (via Copenhagen and Hamburg).

During the summer we could have travelled Munich–Berlin with Deutsche Bahn, with four hours the fastest train connection within Germany, and taken the Snälltåget from there, but as the Swedish company changed to their autumn timetable this connection did not work out.

The ticket for two in a private couchette came at 4000 SEK (about 400 EUR) and had to be booked on-line. Due to covid-19 restrictions the remaining four beds weren't filled up, but we were given all six complementary packs of drinking water. The choice at the restaurant car dubbed "Krogen" was limited due to the pandemic, and did not include any single organic item. Washing facilities in the couchette car are limited to the common toilet. The beds are a little wider than on the Alpen-Sylt-Express which might have been the reason for that my sleep was deeper and less disturbed during that night. On this train we were given duvet covers.

The train is provided at Malmö C in good time before departure, so we were able to board almost an hour before.

By the way: The train company's name, Snälltåget, is a play on words. The Swedish word "snäll" means "nice" and is a false friend with the German word "schnell" meaning "fast". Before IC and ICE trains took over the city connections in Germany, the then faster trains were referred to as "Schnellzüge", "fast trains".

What should have been a 1.5 hours train ride with the Meråkerbanen regional train from the Snälltåget's final destination Storlien to Trondheim, turned out to be a show stopper for climate-friendly travel as well as a tedious money sink.

When planning the journey in June 2021, the timetables of Meråkerbanen were still on-line, although we expected a rail replacement bus service due to the ongoing electrification work on the route (just like on our last train journey from Stockholm to Storlien in 2017). What we did not expect was that there was no public transport service at all! Locals told us that the connection has not been operated for the entire covid-19 pandemic, mainly because the Norwegian and the Swedish side wouldn't agree on the test and vaccine control procedure at the border.

So we had to hire a cab from one of the taxi companies in Åre: Taxi Åre did not have any cars left, but Topptaxi was willing to drive us from the train station of Åre over the border to the nearest Norwegian village, Meråker, at the hefty price tag of 2100 SEK. Due to an initial misunderstanding on behalf of the taxi operator we ended up paying only 1700 SEK for the 1.5 hours ride which would have been the price from Åre to the border. Given the fact that Storlien–Meråker would have been much shorter, this was probably a fair deal for both parties.

Since it was raining (the expected weather) we asked the taxi driver to drop us in front of the Coop Xtra hypermarket in Meråker where we could wait inside the "cafe" corner for the bus to Trondheim. A little more than an hour later we were heading over to the bus stop at Meraker school from where the bus no. 670 would take us to Trondheim. (Mind you that this 1.75 hours public bus service does not run on weekends.)

The best and most comfortable way to reach Venice is by train to Venezia Santa Lucia railway station. Trains from Germany or Austria run by the Austrian railway, ÖBB, also have sufficient dedicated space to take a bicycle with you. If you really must fly into Mestre make sure to compensate your climate gas emissions using services like Atmosfair. At any cost: Do not come by cruise ship! "Le grande navi", much hated by the local population, destroy the very foundations of this beautiful city and are a criminal danger to all other passengers in the narrow waterstreets -- a price you hopefully are not willing to pay for a tremendous view at San Marco. 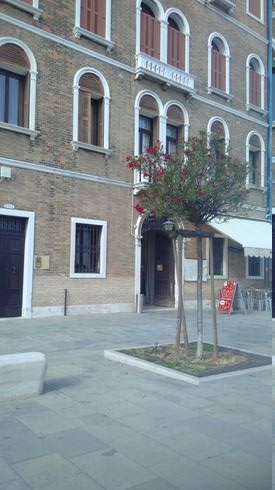 Moving around in the very town of Venice is done in an eco-conscious way -- by public transport or walking. For the reliable ACTV waterbusses and ferries you can buy day, two-days and three-days passes which also cover the greater area including Chioggia. In 2019 a 72 hours ticket came at 40 EUR, for children above 4 years at 22 EUR.

Bicycles aren't allowed in the narrow streets, so if you come by bike you'd better stay on the Lido of Venezia. To get there from Venezia Santa Lucia train station take the ferry no. 17 from Tronchetto to Lido San Nicolo (from the train station you must carry your bike over the steps of the Ponte della Costituzione bridge). ACTV bicyle tickets come at one EUR per bike and ferry ride. 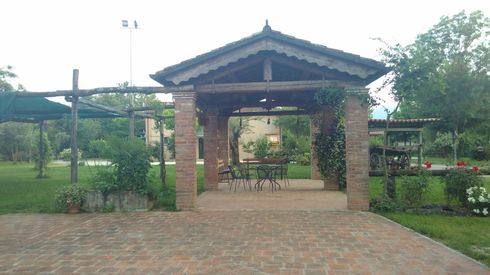