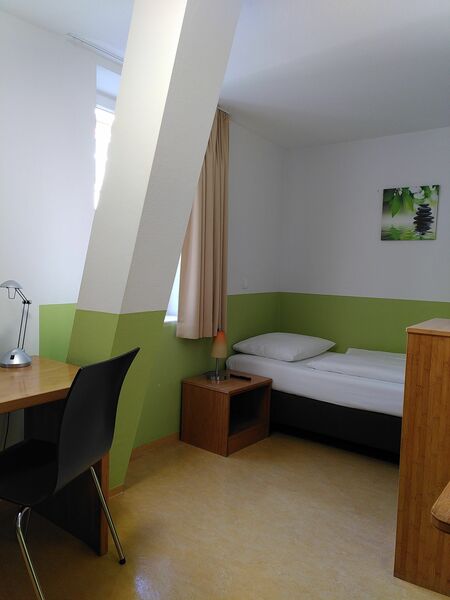 Ever wanted to stay in a bicycle-friendly hotel that produces its electricity itself with its own water power plant? Surrounded by the Esslingen university campus on the entrance side and the Hammerkanal, a side channel of the Neckar river, at the back the EcoInn makes a perfect over-night stop for cyclists on the Neckar valley bicycle route running from Mannheim to Villingen-Schwenningen. It is not only a sustainably driven hotel (with many certificates and memberships in organisations for the common good), but, for groups and families, also offers its services as a eco hostel at special conditions on request.

For my stay I got a basic, easy to (steam-)clean room in the part of the house which probably is given to hostel guests, painted with organic colours and decorated with a climate-neutral photo wallpaper. Despite its austerity the room, among others due to the absence of synthetic carpets and cushions and the use of healthy, sustainable materials felt comfy and welcoming. The towels are made from organic cotton.

Unfortunately the breakfast is not fully organic: You can have organic eggs, tea (though no green variety), chocolate and fruit spread, bread, milk and soy yoghurt, inside or on an outdoor terrace over the Neckar channel.

The hotel does not have a regular restaurant but welcomes external guests for breakfast and opens a pop-up buffet restaurant every third Friday of a month: The vegetarian Delicantina partially uses organic ingredients, though the overall focus is on regional produce.

In general city life seems to begin on Wednesdays in Esslingen: When I came hereMonday through Tuesday with a small itinerary of partially organic (day) cafes, I found most of them closed, so unfortunately all descriptions below (except for one) are based on upfront research and a view from the outside, confirming the existance and general appearance of the place. 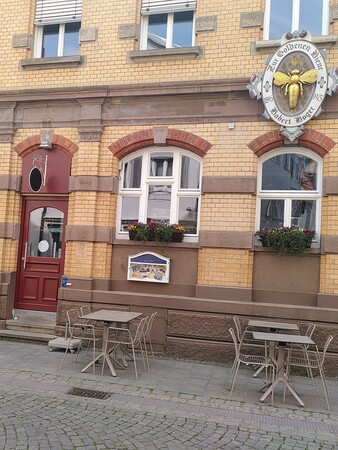 Prior to arrival, I was especially looking forward to have organic coffee and cake or tart at Fräulein Margot, and indeed, on another day of the week it would probably have been fun to watch passers-by in the pedestrian area. 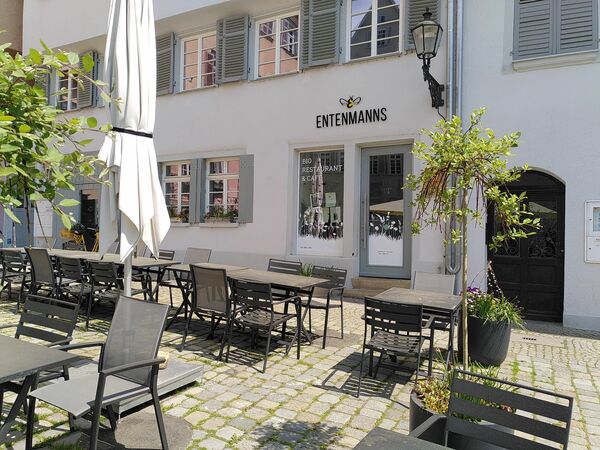 Second on my list was the day cafe Entenmanns on Rathausplatz, an organically certified place offering salads, bowls, and Swabian Maultaschen. This filled local pasta originally is a vegetarian dish, at times using left-overs of Sunday meat. Locals lovingly refer to it as "Herrgottsb'scheißerle" ("little Lord God's fuck over"). The name refers to when the meat-containing version was eaten during the meat-prohibit of lent. I would have loved to have this dish here, simply to do justice to it as its inferior (and throughout Germany omnipresent) industrial version comes with highly processed usually industry-meat based fillings. Much of the ingredients they use at Entenmanns are produce of their own market garden which currently is in the conversion period to certified organic agriculture. 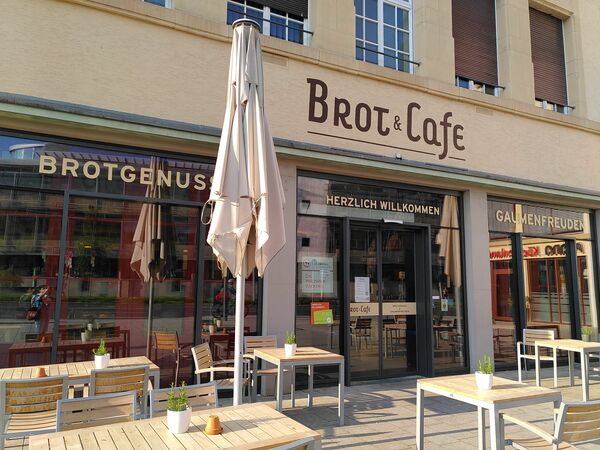 To the rescue on Mondays and Tuesdays comes Brot & Cafe. However, don't expect gourmet coffee from this self-service eatery to the right of the Naturgut: Despite the separate entrance it also serves as the supermarket's bakery till. Given the vicinity to the university campus I expected to see a lot of students, but as the campus itself seemed deserted (probably due to pandemic online courses) the cafe was, too.

Since the reason of my stay didn't leave me with the opportunity to eat out on my own I did not have time to try one of the first organically certified restaurants in the greater Stuttgart region, simply dubbed Kitchen. Wholeheartedly catering to both, omnivores, vegetarians, and vegans using predominantly regional produce according to the season, they also describe themselves as zero-waste supporters. So I really would have loved to eat out here (or in their sister restaurant in Böblingen) – if you have the chance let me know about what you think.