An inner-city district to be developed from scratch is the most exciting thing in the life of city planners, and Hamburg's Hafencity with its recently opened Elbphilharmonie concert hall is Europe's biggest inner-city development in modern times. When finished it will consist of ten often quite different neighbourhoods, with many sustainability aspects considered. If you have the time take part in one of the guided tours (free of charge) or pay a visit to the Sustainability Pavillion Osaka 9. The latter houses a small fair-trade cafe bar dubbed Die kleine Elbfaire where you can have a coffee or soft drink and buy pre-packaged fairly traded sweets. 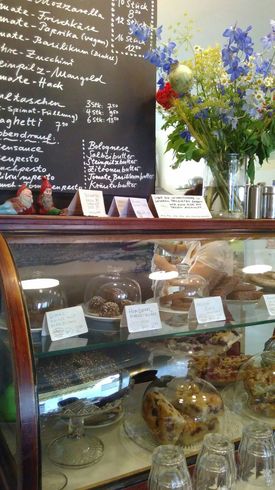 With its name drawing from the similarity of the words "fair" and "Fähre" ("ferry") the little coffee bar is a spin-off of Elbfaire, a fair-trade lunch cafe and meeting place with a pleasant backyard run by the ecumenical association of 17 Hamburg-based churches. On weekdays you can come here for an organic vegetarian lunch between 12 am and 14:30 pm, or step by for a fairly traded organic coffee drink together with home-made organic cakes.

Another organic lunch option is the self-service day cafe of the nearby Alnatura supermarket.

When looking for healthy organic food in the Hafencity you may be guided to Greenlovers, a lunch restaurant serving soups, stews, bowls and salads using predominantly locally sourced ingredients. Unfortunately the promising name is misleading since the place does not have an organic agenda. However, I was assured that tofu and eggs always were organic, and if you dare to ask you may occasionally find one or another organic vegetable used in the dishes. There's a second branch near the townhall with longer opening hours, keeping open Monday through Saturday until 7 pm.

As you might have noticed from the restaurant reviews Stockholm is full of small-scale local food chains -- the majority of them with two or three branches when counting in the day-open cafes covered by this post.

When entering Stockholm C train station through the main entrance and immediately descending to the basement you'll notice the bright green signature colour of the Coop supermarket store (which, by the way, should be able to provide you with sufficient organic food for your trip). With its entrance in your back you'll easily discover a branch of the city's first and so far only fair-trade coffee chain Barista. Fine when you're on the go, but they also have a real cafe in Söder. Coffee and milk are organic as is the yogurt you may have for breakfast and the majority of all ingredients used in salads, sandwiches and scones. Their aim is to have a fully organic store cupboard in the very near future but do not promise anything for fresh produce. If you stay in Stockholm for a while you may consider a customer card which entitles you for a ten percent discount on your purchase and an Ethiopian school child for a free meal.

If you're looking for a place to work alongside a tasty coffee drink (made with organic milk if not plain) head for the Johan&Nyström coffee roaster's bar and co-working space in Kungsholmen. You can rent a working place or meeting room by the hour, day or month, and enjoy organic juice or iced tea. Not all the coffees and teas you may want to buy for use at home are organic, and you have to ask about the ingredients of the (absolutely tasty) toasted sandwiches and pastries. Note that the place accepts cards only.

There are two more Johan&Nyström cafes in town, one near Mariatorget (shop, class room, coffee and tea bar) and a coffee house in Östermalm. The latter will offer co-working space and meeting rooms starting autumn 2017. Note that the opening hours given below apply in summer. In the dark season many shops including these open later and close earlier.

If you walk or cycle along Folkungagatan in Söder you might pay attention to a shop window filled with bicycles. Bicycle shops aren't an attraction on its own right in bicycle-friendly Stockholm, but you may want to have a closer look at this one, as Café Le Mond isn't just a bicycle (repair) shop, but a cyclist cafe offering partially organic breakfast, soups, salads and sandwiches. On Tuesdays and Fridays there's a breakfast buffet (cyclists are entitled a discount), and on weekends you can have brunch. On weekdays between 11am and 2pm there's free coffee with your meal. Since I could not make it inside, I'm happy to hear about your experience.

In and around museums

If you're on a tourist's track you may find relieve in that an organic coffee drink at Moderna Museet on Skeppsholmen is easy to have -- not at the museum's cafe bar itself, but at the entrance to Arkitektur - och designcentrum next door. Here you find Café Blom, a cosy self-service cafe with a serene outdoor terrace accessible without a ticket to the museum. Bread and pancakes, most lemonades and some of the ingredients of the tasty and nourishing salads or sandwiches are organic but stay away from shrimps, mayonnaise, chicken and meat products.

For an all organic coffee or lunch break head for Fotografiska cafe inside the museum of photographic art. Unlike the museum's restaurant it is however not accessible without a ticket to the exhibition.

Arriving early at Stockholm C and fancy a 100 percent organic breakfast? Take the short walk to Café Genuin, a somewhat hidden organic bakery. For later on the day lunch sandwiches, wraps and salads are available, too, and of course a coffee or soft drink, roll or fancy pastry.

In the heart of Gamla Stan you'll find Naturbageriet Sattva, a holistic, predominantly vegan organic bakery, not using refined sugar. Step by for a soft drink, decent coffee (with organic cow's milk if you like) and a tasty cinnamon roll (kanelsnurra), but scan the organic labels on the pre-packaged beverages as not all of them are organic. In summer they also offer pre-packaged vegan organic ice-cream. Seating is limited, especially when the weather disallows for outdoor tables on the street.

When the weather is nice the island of Djurgärden is humming with locals and tourists alike, and all places covered in this section keep open only when a steady stream of visitors can be predicted. In winter all of them are closed, and opening hours outside the light summer season quite restricted. Places inside the theme parks require the purchase of a ticket.

On the water-facing promenade inside Gröna Lund entertainment park the Boardwalk Café offers organic and fairly traded coffee drinks and tea on the go. Note that the cinnamon roll adverted as a package with the coffee is neither of both. The opening hours match those of the entertainment park.

Inside Skansen outdoor museum you'll find a self-service Koloni outdoor cafe covered by the eateries and restaurants section. Note that the opening hours of this predominantly organic place are more restricted than those of the museum itself.

Open to all tour goers on Djurgården is decidedly sustainable Rosendals Trädgårdskafé. Unfortunately I couldn't make it there during their opening hours, so no review here (yet). Note that the place accepts cards only.

Waiting for a flight is tedious, and having an overpriced coffee at an uninspiring airport coffee bar an efficient way to kill the time. Fortunately Arlanda allows you to do this with a better conscience, with tea brewed from an organic tea bag or an organic, fairly traded coffee drink served with organic milk in a real ceramic cup instead of a one-way plastic or cardboard one. To do so on international terminal 5 watch out for the Lavazza sign presiding over an otherwise boring place dubbed Food market. They also offer 0.2l tetrapaks with organic orange or pear juice.

There are also two Johan & Nyström coffee bars at terminals 2 and 4.

Airlines and airport eateries have been pretending to serve first class food for so long it may come as a surprise that most airports and nearly all food served on flights are still 100 percent free for organic ingredients. With the notable exception of Amsterdam Schiphol airport which was a pioneer when opening "Fair Taste Cafe" within the central food court in April 2011, a coffee-and-sandwiches-to-go eatery which was serving fairly traded and sustainably sourced food and drinks, with a high percentage of organic items. Unfortunately only four years later this pleasant retreat was replaced by yet another Starbucks coffee branch.

Schiphol nevertheless remains a first class option for the food-concerned traveller since other food stalls in the transit zone started to offer a few organic options -- be it organic raisin buns or prepackaged dried fruit/nut blends. Their number has been increasing since, so if your transfer time is long enough you will probably be able to collect a sumptuous family picnic. In any case scan the displays carefully for the "organic" keyword. Mind you that prices are stiff, but this concerns both, conventional and organic options alike.

On my last transfers the Mediterranean Sandwich Bar opposite Starbucks in the central food court (Lounge 1) offered two types of tasty paninis made with organic bread as well as organic milk in half-liter boxes and yummy caramelized and salted pecan and cashewnuts. Unfortunately the milk they use for coffee drinks is not organic (nor is the coffee). While hurrying to the B apron I noticed a newly established (though much smaller) Fair Cafe on the right hand site. I did not have time to take a close look, but I noticed the afore-mentioned organic raisin buns and nut mixture. In addition the airport website claims offerings of organic meat at the Harvest Market in Lounge 2 at the D-concourse, so keep your eyes open and ask.

When leaving the airport there are branches of the Albert Heijn supermarket chain offering a decent selection of organic food items.

Flying KLM from Munich into Amsterdam I was pleasantly surprised by the economy sandwich I usually decline: It wasn't the usual conventional fare but made of organic rye bread and cheese made from near-organic milk. The cake offered on the corresponding flight wasn't organic, but the carrier claims that their coffee is fairly traded (though not organic). Business class passengers may enjoy organic yoghurt and ice-cream.